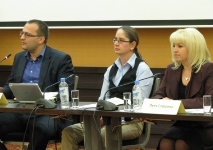 Bulgaria should seek a consensus on major national issues, said the leaders of the “Blue Coalition” Mr. Martin Dimitrov and Ms. Petya Stavreva who were special guests of the National Program “Governing skills”.

Mr. Martin Dimitrov, Chairperson of the Union of Democratic Forces said that Bulgaria is now in very delicate financial situation and he stressed that the state can not afford even a fraction of a second to admit economic insecurity. According to Martin Dimitrov, the country should formulate several national objectives, one of which should be the best business environment, he said. Bulgaria now has the lowest taxes, but there continue to experience a serious problem with the administration and a problem with the judicial system in regards of contract compliance. According to the UDF leader the question of the entry into the euro area is very important for the country, because that way the Bulgarian banks will be able access much cheaper loans from the European Central Bank, which in practice will bring the bank rates down.

Ms. Petya Stavreva, Chairperson of the “United Agrarians” emphasized the need for a common national cause, which must be Prospering Bulgaria. There is no universal recipe for the successful development of the country, but the people who stand at the helm of the country must act as statesman, not bureaucratically. Ms. Stavreva urged to depart from the trial-and-error politics, and stressed that Bulgaria’s tomorrow starts today. Ms. Petya Stavreva, herself a BSoP`s Alumni, said that the School is a meeting place for people who are bound to look forward and join their efforts for a more successful Bulgaria.