office@schoolofpolitics.org +359 2 952 68 82 +359 2 851 93 46
School of Politics > News > Новини > News > Mr. Georgi Parvanov to the Participants in the National Program: “Overcoming the Financial Crisis and Realization of a New Ambitious Program Are on Your Shoulders” 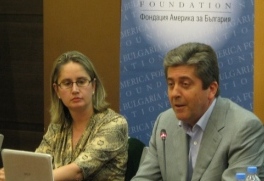 “This program should include a new national cause and you, young people, should think about it,” said Mr. Georgi Parvanov, who was the president of Bulgaria from 2002 to 2012, to the participants in the National Program “Governing skills”. He was a guest speaker at the session “30 minutes with…” in the first day of the fourth course of the Program, whose topic is “Bulgaria in EU – principles of good governance.”
Mr. Parvanov emphasized the need for good parliamentarians, for people who are good speakers and experts. He explained that this was important not only for the National Assembly, but also for Bulgaria in general. Mr. Parvanov said that he would include such people in his team, even if they were among his greatest personal critics. He also said that he has always been impressed when he sees such people among his political opponents.
Mr. Georgi Parvanov said that he shared the common concerns about the EU future, but he was sure that the centripetal forces would prevail. He admitted though that he was optimistic about relationships in the EU, because there is a trend for creation of different levels, of center and periphery in the Union and this could have economic impact in the future, which could not be good for Bulgaria.

Earlier in the day, the program started with the participants’presentations on the topic “Energy and Energy Efficiency.” The group assignments were evaluated by a special jury, which included experts from the government, NGOs and representatives of political parties. The special guests were Ms. Valentina Ilieva, who is the head of the “Energy Efficiency” Department at the Ministry of Economy, Energy and Tourism and Ms. Ivanka Dilovska, the Chairperson of the Managing Board of the Institute for Energy Management.