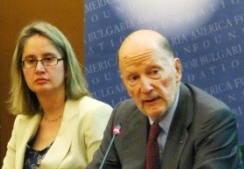 “Democracy should be learned but it is difficult to be imposed”, said the former Prime Minister Mr. Simeon Saxe-Coburg Gotha to the participants in the National Program “Governing skills”. The Program during the second day of the course started with his lecture.
Mr. Saxe-Coburg Gotha said that he was very happy to see how young people progress in their lives and careers in a completely different society. “For us, the elder people, democracy has no price”, he said.
The former Prime Minister highlighted the importance of the institutions because without them there would not be a strong state system. In his opinion they should not been personalized because they symbolize the state.
Mr. Simeon Mr. Saxe-Coburg Gotha shared with the participants his memories about the Bulgarian School of Politics founder – Mr. Dimi Panitza.

The program continued with a lecture for the financial and economic crisis in the Euro zone. The lecturers were Mr. Sebastian Barnes, the head of the EU / Euro Department at the OECD, and Mr. Georgi Ganev, who is a program director at the Center for Liberal Strategies.
The afternoon started with a session on the EU budget. Ms. Marinela Petrova from the Ministry of Finance explained to the participants the procedures on how the EU budget is consulted and approved and the priorities set out in the document. After the lecture, the trainees participated in a simulation and had to consult and approve the EU budget for 2013. The case study was prepared by Ms. Ekaterina Karamfilova, a PhD in European studies.