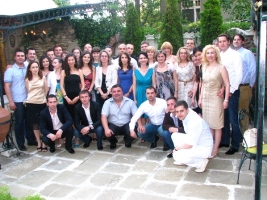 Thirty-nine participants from the National Program 2012 of the Bulgarian School of Politics “Dimitry Panitza”, among who members of Parliament, mayors, municipal councilors and representatives of NGOs, business, state and municipal administration, received their diplomas at a special Graduation Ceremony, which took place on 16th June in Sofia.

The diplomas were awarded by the members of the Board of Directors of the Bulgarian School of Politics – Mr. Antoniy Todorov, Mr. Dimitar Bechev, Ms. Meglena Rusenova, as well as by Ms. Irina Alexieva – the Executive Director of the School.

All three representatives of BSoP` Board of Directors and the executive director thanked to all graduates from Class 2012 for their efforts during the Program and wished them good luck in their professional development.