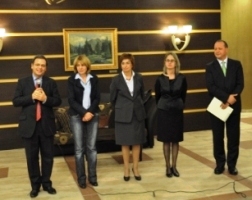 The National Program of the Bulgarian School of Politics “Dimitry Panitza” was officially opened today, 31 October, at the hotel RIU Pravetz. Forty young leaders from the parliamentary represented political parties and the civic sector participate at the training. The Deputy Speaker of the National Parliament Ms. Ekaterina Mihaylova, the Mayor of Sofia Ms. Yordanka Fandakova, members of parliament, ambassadors, and mayors attended the opening ceremony.

“The School of Politics created a model which by now has not been replaced” highlighted Ms. Fandakova. She said that the participants should seek the different perspectives and look for establishing consensus.

Mr. Lenko Lenkov, who is the Program Director “Civil Society” at the America for Bulgaria Foundation, focused on the new ethic charter of the School. He said that everyone involved in the training process should follow the principles laid in the document.

The Chairman of the BSoP Board of Directors Mr. Julian Popov shared with the participants the covenant of the School’s founder Mr. Dimy Panitza always to be irreconcilable with the things that have to be changed.