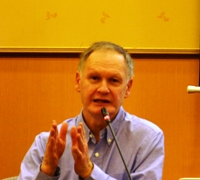 Focus during the third day of the program was charity and spreading the culture of philanthropy. Special guest was Dr. Frederick Mulder, founder of “The Funding Network” – the first open, public giving circle in the UK, active in seven countries. He is an art dealer and a philanthropist. Mr. Mulder generally supports social and climate change causes as well as causes that deal with the popularization of philanthropy practices. Dr. Mulder talked about his personal motivation to give. After that, Eugenie Harvey, who is a director of “Global Networks” in The Funding Network presented the mechanisms of giving circles in more detail.

The day continued with the presentation of the charity causes of the school alumni. The working groups told the present participants how they have chosen their causes on which they work and how they manage to attract other followers in their philanthropy initiatives.