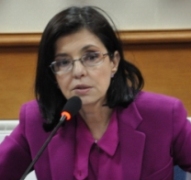 The Deputy Prime Minister for European Policies Coordination and Institutional Affairs Ms. Meglena Kuneva was a special guest speaker at the National program “Governing skills.” She delivered a lecture entitled “Schengen and security policies.” Ms. Kuneva explained the thread of two-speed Europe in the security field and stressed the importance of the Bulgaria`s accession to the Schengen area.

The day continued with the panel “Bulgarian Priorities in the European Parliament.” Guest lecturers were the members of European parliament Mr. Vladimir Urutchev, Mr. Georgi Pirinski and Mr. Ilhan Kyuchyuk. They presented to the participants in the program three priorities, which are very important for the country. Mr. Urutchev presented the topic “The Energy Union and its meaning to Bulgaria”, Mr. Pirinski made a mid-term review of the Europe 2020 Strategy, and Mr. Kyuchyuk talked about free movement and civic rights.

Another accent in the program was the presentation of the Greek financier and banker Mr.

Christos Katsanis who has worked in Bulgaria for years. He was guest in the panel “30 minutes in the company of ….”. Mr. Katsanis presentation was on the relations between Greece and the euro area. He made a detailed review of the history of European currencies and economic factors that led to the current situation.

In the morning the trainees had a lecture “Budget and Finance of the EU.” Ms.  Ekaterina Karamfilova, who has PhD in European Studies, outlined the objectives and priorities of the EU budget for 2015.Then the participants took part in a simulation game of the procedure for adopting the EU budget.