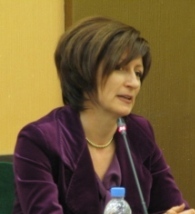 “You are the next generation of politicians – the modern young people with significant social objectives, which you have time to achieve”, said the special guest for the day Ms. Sasha Bezuhanova to the participants of the National Program “Governing Skills”. Ms. Bezuhanova is a Board member of the Bulgarian School of Politics “Dimitry Panitza”. She talked also about e-democracy, e-governance and e-participation. Ms. Bezuhanova underlined the Importance of the major international investors for changing the business culture in Bulgaria and for developing new models of thinking. Ms. Bezuhanova recently was appointed a head for the HP strategic Direction over the collaboration with the public sector in emerging markets. Her work covers 63 countries. She was guest in the panel “30 minutes with…”

The second day of the program started with a lecture by the political scientist Mr. Ognyan Minchev and the sociologist Mr. Tzvetozar Tomov. They made an analysis of the current political system including the definition of the current parties, their evaluation and change in the past and current challenges in their development. During the small group work the participants discussed the options for funding the political parties.

Another focus of the program was the topic “Politics and public opinion”. The sociologists Ms. Boriana Dimitrova and Mr. Kolio Kolev tried to answer the questions IF IT is necessary to monitor the pulse of the public opinion and what are the basic rules for reading the sociological information. The case study was to make an analysis of sociological data and defining target groups which support different political parties.

Than the trainee participated in a simulation of a TV broadcast. The debate topic was “Pros and cons OF the bonuses in the state administration. The journalist – Mr. Boyko Vasilev, a TV presenter of the “Panorama” TV program on the national television channel, gave practical advice and feedback to the participants.