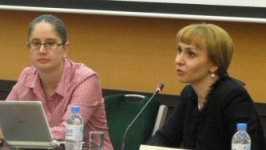 The feeling of the Bulgarian people that there is no justice is very strong and that`s why the purpose of the judicial reform is to overcome the deficit of trust, said the Minister of Justice Ms. Diana Kovacheva to the participants in the National Program “Governing Skills”. She presented the reform through the prism of the European perspective. She underlined that the changes are necessary, because the judicial system has to be more predictable and transparent, more honest and highly professional, more efficient and fairer.

Ms. Kovacheva said that the Supreme Judicial Council and the selection of its members are crucial, because in practice it is controlling the whole system. Minister of Justice announced that she would offer the Inspectorate of SJC a formation of a special unit which will handle with complaints about slow justice before they reach the Strasbourg court.

During the third day of the program the students participated in a role play. They had to vote the state budget for 2052, according to the different ratios of the political forces in parliament. Together with the analyst from “Industry Watch” Mr. Luchezar Bogdanov they discussed the steps of the budgetary procedure, how the various policies at national level are reflected in the numbers and are there right and left decisions in the budget.

The focus in the afternoon was the session “Long-term strategies for Bulgaria”. On the topic “Green and Energy Efficient Economy” lecturers were Mr. Valentin Nikolov, Chairperson of Parliamentary Committee on Economic Policy, Energy and Transport, Ms. Ivanka Dilovska, Chair of the Management Board of the Institute of Energy Management , and Mr. Julian Popov, Chairperson of the Board of Directors of the BSoP. They presented the energy and economy prospects for Bulgaria in light of the EU objectives by 2050.